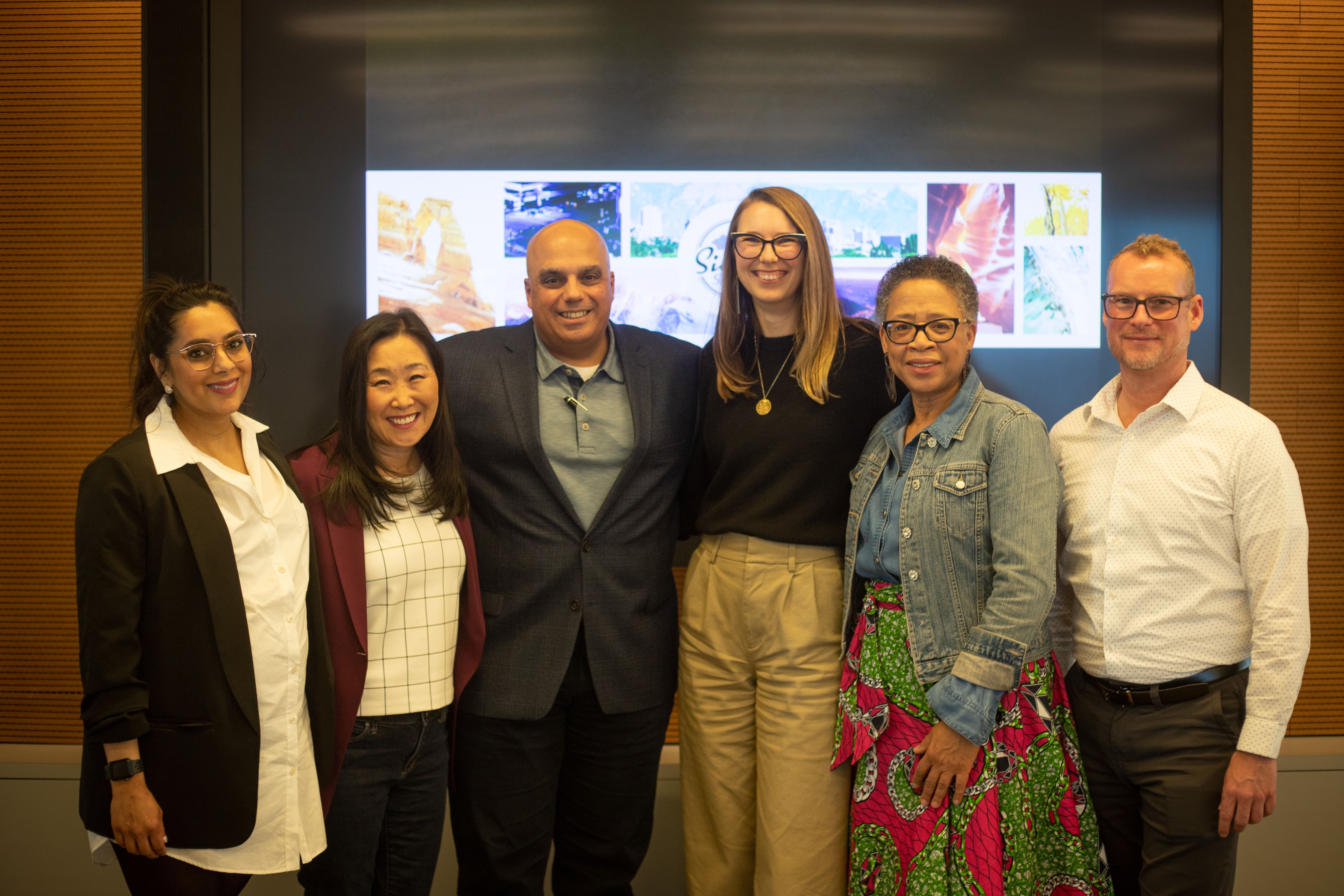 TLDR: Diversity and inclusion are great for the bottom line. Thank you to the Silicon Slopes Organization for inviting me to moderate a D&I panel at Goldman Sachs. It was an exciting and inspirational opportunity.

On Thursday February 20, 2020, the Silicon Slopes Organization, Salt Lake Chapter, held a Diversity and Inclusion (D&I) panel and discussion hosted by Goldman Sachs in downtown Salt Lake City. 150+ people showed up to participate in the discussion. I had the very unique and humbling privilege of being asked to moderate the panel. This invitation came from my involvement in the Silicon Slopes / Utah tech community as co-organizer of Queer Tech SLC. I was also very humbled by the achievements of my “peers” on the panel who included Sara Jones, CEO of Inclusion Pro, Michael Deninno, Consumer and Investment Management at Goldman Sachs, Neelam Chand, SVP, D&I Officer at Zions Bank, Emma E. Houston, Director of D&I for the Office of the Mayor, Salt Lake County, and Elle Griffin, Editor in Chief, Utah Business Magazine.

From the Silicon Slopes Summit 2020 to the D&I panel this week, there is an overarching message the organization is conveying to tech businesses in Utah: If we want to be a player on the global stage then we have to act like one, which includes philanthropy, ensuring a future talent pipeline by funding science, technology, engineering and mathematics (STEM) in Utah schools, attracting and retaining top talent, and fully supporting diversity and inclusion initiatives from the top down.

“If we couldn’t measure the impact of our diversity and inclusion efforts and programs, it would be a hard sell among company executives.” ~Huey Wilson, SVP, Mattel (2)

What is Diversity & Inclusion?

Diversity refers to the traits and characteristics that make people unique while inclusion refers to the behaviors and social norms that ensure people feel welcome. (1)

Inclusivity is crucial for diversity efforts to succeed, and creating an inclusive culture will prove beneficial for employee engagement and productivity. (1)

Diversity and inclusion is a company’s mission, strategies, and practices to support a diverse workplace and leverage the effects of diversity to achieve a competitive business advantage. (2)

Businesses need to adapt to our changing nation to be competitive in the economic market and improve employee retention and reduce turnover. (3)

“When asked by show of hands if they would leave Utah for a better job offer, the vast majority of the panel audience, consisting of several minorities in tech, affirmed, yes.”

First and foremost, we wanted the panel and audience to answer, why are we still having this discussion in 2020? The answer is because in 2020, things still have not dramatically changed, especially in the tech sector as the statistics from just 6 years ago demonstrate. From the US EEOC, here are the national numbers as of 2014: compared to overall private industry, the high tech sector employed a larger share of whites (63.5 percent to 68.5 percent), Asian Americans (5.8 percent to 14 percent) and men (52 percent to 64 percent), and a smaller share of African Americans (14.4 percent to 7.4 percent), Hispanics (13.9 percent to 8 percent), and women (48 percent to 36 percent). (4) I could not find specific statistics for the State of Utah, but unfortunately it’s an easy assumption to say we're probably fairing worse than the national averages.

We unanimously decided to cut the prepared panel questions short and within 30 minutes of beginning the discussion we were having open dialogue with the audience over the next hour. We invited “real talk” to occur and that’s what we got.

By and far it seemed the largest and most vocal minority represented at the panel discussion was women. Many women working (or trying to work in) technology feel they still face inequality in general, and in Utah in particular. Women still earn $0.82 on the dollar compared to male counterparts. Women also vocalized a major concern that access to childcare is still a huge challenge particularly in Utah. There were also women in the audience who are running programs to train incarcerated women to code. It was speculated out loud whether they would ever be given the chance to contribute these skills to society. I believe the general consensus is we hope they can, however, they will be limited to which sectors they can work in due to federal regulations (so, for example, banking and fintech would not be an option). While change is happening for women, it continues to be slow. It’s not surprising that another meetup group, Gender Equality in Tech SLC has just recently been formed and I will be interested to see if we could join forces with Queer Tech SLC to further mutual goals of awareness and outreach.

We also heard from someone from the hearing impaired community who felt they are often overlooked for opportunities commensurate with their skill level. According to Fortune magazine, businesses should make an extra effort to connect with workers with disabilities, a ready, capable, and sizable workforce 20 million people strong (nationally). This group often faces an uphill battle to get hired: The labor force participation rate for individuals with disabilities was 20.8% in July, compared to 69.2% for those without disabilities. Also according to this same article, the number one reason cited for people with disabilities not getting hired? Here’s that word again: unconscious bias. Another reason, because people don’t want to feel uncomfortable. (7)

There weren't any concerns brought up from the LGBTQIA+ community. To be honest, I’m not sure whether it’s because this group doesn’t feel that relegated to the sidelines anymore, if there is still fear of coming out in the Utah professional sphere, or if we just weren’t that successful at reaching this interest group.

Of course one of the biggest challenges to diversity and inclusion is talent recruitment. Clint Betts, Director of the Silicon Slopes organization is quoted as stating that Utah has a branding problem (5). He’s right, we have a fantastic quality of life here in the best managed state in the US, with close access to absolutely glorious outdoor amenities. So why is it that minority people don’t want to move or stay here? What about Utah’s image do we need to change?

In addition to recruitment, talent retention in Utah was a huge concern brought up during the panel discussion. When asked by show of hands, the audience consisting of several minorities in tech, if they would leave Utah for a better job offer, the vast majority of the panel audience affirmed, yes, and not just for financial reasons. One woman appearing to be of non-white descent, said she’s lived here for 7 years and still doesn’t have very many friends. She stated, this is the biggest reason she would leave. Are Utahans really that prejudiced or unfriendly, if so, how can we change this?

The talent pipeline and consequently the available talent pool is by far the biggest reason cited for why there is still very little diversity in technology. Access to computer science education has been limited by socioeconomic status and zip code. As previously discussed in another blog post reporting on the 2020 summit, the Silicon Slopes organization is leading the way with a foundation and philanthropic arm targeted towards Utah schools. Other organizations are also working to level the playing field, such as Lambda School which doesn’t require tuition payback until a job producing a certain amount of income is obtained. A big hindrance for many people, especially for minority youth is that they don’t see people like themselves working in tech. This will require outreach from minorities working in tech.

Companies need to offer required D&I training, beginning with the C-suite (since as mentioned before, this needs to be a top-down initiative in order to work).

Several organizations offer such training such as InclusionPro, which is the company headed by panelist Sara Jones. I also previously blogged about the inspiring seminar offered by Troy Williams, head of Equality Utah at Silicon Slopes 2020, and the inclusion training that is offered by that organization.

Corporate training and the examples lead by company leaders can help bring awareness of unconscious bias and microaggressions. Building awareness is a first step towards real change. Assigning peer “Success Mentors” to new hires, especially those recruited from out of state could also be a great strategy.

Since it’s been proven that D&I is great for the bottom line, it’s important to bring awareness of these issues into hiring practices. To quote Clint Betts again, he admonished hiring managers at Silicon Slopes 2020 to “hire people who don’t look like you.” Of course we all know that things like budget, and time to market, matter. Needing the fastest most skilled people currently available vs. time constraints and money for training can make a difference in a sink or swim situation. Whenever possible, however, one hopes that hiring managers and executives to consider the long game, and weigh those outcomes against short term objectives.

I have never moderated such a panel in front of 150+ people, let alone a panel of such accomplished individuals. Overall the consensus was that I did a great job. So, whew! I’m ecstatic and currently seeking the next thrill!